How Much Does Wheel Alignment Cost? 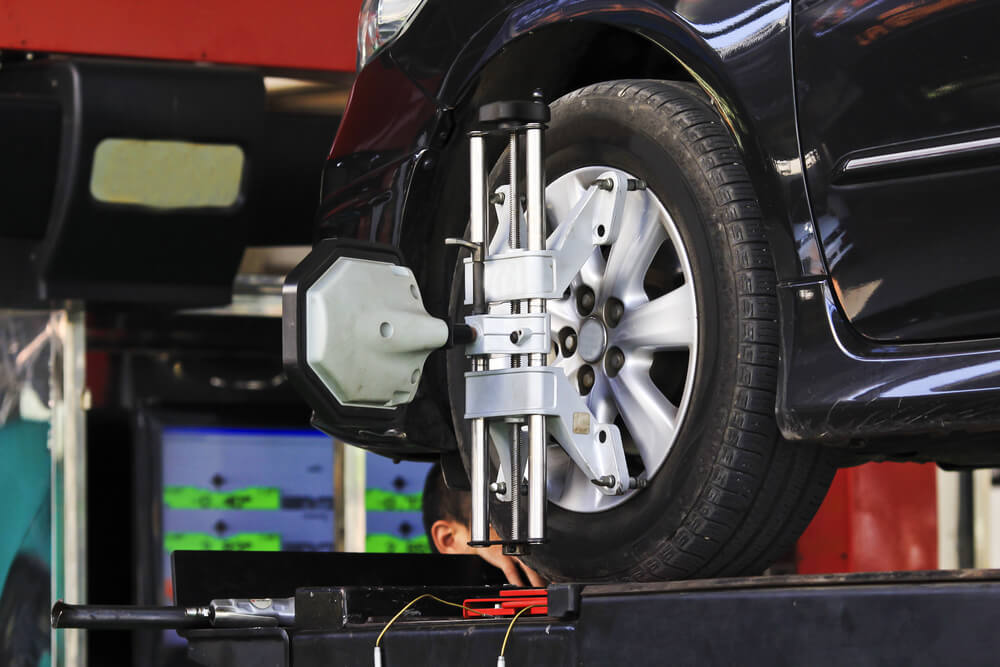 But driving over bumpy roads - including several types of speed bumps and ramps - can soon mean that wheels are knocked out of their level stance on the road, instead meaning that they point slightly outwards or inwards.

This can cause a number of problems with your car, primarily:

Because the rate at which your tyres will wear is so closely related to correct wheel alignment, you should try to get your wheels checked very regularly, with many expert mechanics suggesting this should be done at least once a year. In any case, it’s normally undertaken as a routine part of every intermediate service - but if you haven’t had your car serviced for some time, and have missed a due date or mileage landmark, then wheel alignment as a stand-alone task could bring some benefits.

Misalignment of a vehicle’s wheels comes in two forms - toe-in and toe-out - the former is when the wheel or wheels are pointing inwards, rather than vertically, and in the latter, they’re skewed outwards.

How Will I Know When My Car Needs Wheel Alignment?


When your car came off the factory production line, it was set up so that its wheels - and therefore also the tyres - were correctly aligned with the road.

This meant that driving it was relaxing, stress-free, and required little effort.

Over time, though, as you clock up more miles, your car will travel over a road surfaces vastly differing in their quality - some of which you’ll probably feel as bumps, but equally some which will be undetectable inside the car - but which will nevertheless have a bearing on how well and how much of your wheels are in contact with the road.

Incorrectly aligned wheels and tyres will mean that your car creates more ‘drag’ as it travels along the road. And ultimately, you will pay for this by way of reduced fuel economy, so it’s one of the easiest - and in itself, cost-effective - ways to boost the number of miles you get to every gallon.

That extra resistance against the road will also show itself in the way your car handles. As we’ve already mentioned above, it will take more effort to keep the car going in a straight line - particularly at higher speeds - because misaligned wheels will naturally want to take the car off in more than one direction at a time, and they’ll do this more often the faster the wheels are turning.

Compared to the cost of a pair of new tyres, getting your front wheels aligned is relatively cheap, especially as, if it’s a straightforward job, it can be done with the wheels still on the car.

Sadly, incorrectly aligned wheels is one car problem they haven’t yet been able to monitor and detect electronically and link up to a car’s warning systems. That means you won’t see an amber or red warning light on your dashboard to alert you to a problem - it’s purely down to you, your own instincts, driving skills and common sense to notice when you might have a wheel alignment problem.

When a car’s wheels are out of alignment, the driver might also notice that their steering wheel is not straight, yet their wheels are going in a straight line. Conversely, you might also have to drive with the wheel slightly off-centre to ensure that your car is travelling straight ahead. Unconsciously, you might get used to compensating for incorrect wheel alignment when you’re driving - but it’s classed as a major fault, and in the most extreme cases can lead to an MoT test failure. As you can see here, wheels and tyres are included in general terms on the official MoT test form filled in every time a vehicle is tested. That means an examiner can fail a car for any defect which they consider will affect the safety of a car detected at the time of the test.

Can I Do Anything Myself To Help Ease The Problem?


Even if everything feels right, and you haven’t experienced any of the symptoms mentioned earlier, there are some issues potentially affected your car’s wheel alignment that you can address yourself, including:

How Much Can I Expect To Pay For Wheel Alignment?


To begin with, wheel tracking and alignment checks are much more sophisticated than they used to be.

It used to involve hanging gauges, suspended from a fine thread, onto which a light or laser beam is shone. These measure any divergence between the alignment of the wheel and a true vertical.

Four-wheel alignment is carried out by a number of such beams, which can measure the angle at which all four wheels sit, at least three points around the wheel’s circumference. While one mechanic ensures that the steering wheel is set and held dead straight, another will check and adjust the alignment of each individual wheel in turn.

Because it’s a precise and labour-intensive - yet also reasonably quick - job, wheel alignment prices vary relatively little compared with many other car repair and maintenance tasks. In general, you should expect the job to take between 40 minutes and an hour. If you have new tyres fitted, many garages will also carry out wheel alignment at the same time, as part of their service to ensure proper fitment, and to make sure the tyres last as long as possible.

As a general rule, cars with wider wheels - especially if they’re fitted with low-profile tyres and the ride position is low to the road - should have their wheel alignment checked most often, because the faults mentioned earlier are likely to be more apparent when they start to develop.

Great news if you’re looking for wheel alignment quotes for a car you own or run - the price has been coming down, albeit quite slowly, in recent months.

It costs an average of just under £35 for front wheel alignment, whereas a year ago, that figure was nearer £37. There’s a good reason why this wheel alignment service price has come down - it’s simply because more people are asking for it, and so it’s interesting more garages who are keen to carry out the work. And more competition always means good old market forces will reduce the wheel tracking and balancing cost.

For that kind of price - often less than it would cost for a single new tyre - you’ll be doing your car and your wallet a favour. You might feel the difference in the way your car handles more sure-footedly - especially at higher speeds - but you’ll probably also notice that you get an extra mile or two (or more…) from every gallon, so you’re also making long-term savings when you visit the pumps.

What If I Need All Four Wheels Aligning?


You could find that the choice of outlets which can carry this out is restricted, as not all of them have the necessary equipment to do it. It uses a series of HD digital cameras to check alignment, but as this service is above that offered with standard wheel alignment, you should expect to have to pay more than you would to just have wheel alignment checks and adjustments carried out on your vehicle’s front wheels.


As a final precaution, wherever you have your wheel alignment carried out, you should ensure that either they carry out a road test themselves, or allow you to do this yourself, and then report any problems, and take the car back for further adjustments if necessary.

If the problems persist, it’s likely that your car’s problems go deeper than the wheels, and could be to do with the suspension - which is likely to mean a more detailed investigation, and very likely, a higher repair bill.


While it might be a small inconvenience to take your car to a garage for wheel alignment checks and adjustment, you won’t have to pay a huge amount for the job.

And better still, that modest outlay is likely to be recouped in pretty short order, because you’ll be making savings on two of the biggest outlays involved in running any motor - fuel and replacement tyres - as well as potentially saving your car from some more expensive, long-term damage to parts associated with the suspension, which are a whole lot more difficult - and for that, read also expensive - to fix.

Better still, you’ll probably notice an immediate improvement in the way your car handles, so meaning that driving becomes less of an effort, and so relieving your stress levels, meaning you arrive at the end of every journey a bit more relaxed, and ready to take on whatever comes next.

You can get wheel alignment carried out at a variety of places, from national fast-fit chains, through franchised car dealers with on-site workshop facilities to local independent garages.

The real hassle of a relatively small job such as wheel alignment is the time it can take to get quotes to make sure that you maximise your chances of saving cash. So why not make the most of our service a get a quote today.

Don’t put up with getting a rough ride from your car - get wheel alignment quotes easily and quickly by registering with MyCarNeedsA.com. Then choose the quote which is right for you, based on the garage’s location, price, or feedback provided by other MyCarNeedsA.com customers.