Why Is My Car Making A Rattling Noise? 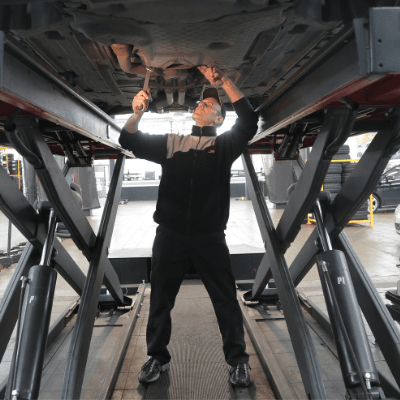 Why Is My Car Making A Rattling Noise?

There is nothing worse than hearing a rattling noise while driving down the road, because you know immediately that there is something wrong with your car. Rattling noises are extremely annoying and can cause us to panic in case it comes with a hefty repair bill, but most of the time they are early warning signs indicating something is up. In this article, we will look at the most common causes of rattling and what they mean to help you diagnose your problem.

Rattling noise underneath the car

If you have been able to decipher where exactly that rattling noise is coming from, and know that it’s coming from underneath the car then here are a few things it could be telling you.

There is a heat shield that surrounds your exhaust system and as it’s made of thin metal, it’s more susceptible to rusting. As the part detaches, it may be the cause of the constant rattling sound you’re hearing. Thankfully, this is one of the more inexpensive parts to fix.

Your car’s exhaust system will stretch the full length of the car and over time, it’s likely that this joint holding the exhaust in place will become loose. When this happens, your exhaust will be shaking and knocking against the rest of the car causing the annoying rattling sound.

Rattling noise underneath the bonnet

After reading the above, are you certain the issue is coming from under the bonnet? It will come as no surprise that over time, one of the many moving parts sitting under your bonnet can be the common cause of rattling sounds.

If your car’s water pumps are failing, they will make a loud rattling sound caused by the bearings rubbing together. If this is the case, you will notice that there are issues with your car's temperature when looking at the gauge on your dashboard. This is due to the fact there is a lack of pressure from the pump.

If you notice the rattling noise when your car is idling, this is coming from your engine and is a sign of low oil pressure. If you ignore this issue, you could end up causing serious damage to your engine and the moving parts.

Rattling noise inside the cabin

If you don’t think it’s under the car or under the bonnet causing the rattling, then it could be coming from inside the car’s cabin which is where the less serious issues arise.

It could be to do kids toys or something that has got lost in the car over time. Sometimes, if there are things down the side of your doors or in the globe box they could be the cause of that pesky noise.

Be aware that the problem could also be a sign of a loose fitting somewhere like in the window pane or door panel.

Find a mechanic near me

Your car is trying to tell you something by making random and unusual noises, which means you should listen and get it checked out sooner rather than later. Here at MyCarNeedsA.com, we can help you find a reputable local mechanic to help rectify your rattling problems. Get your quotes today!

Drilled vs Slotted Rotors: Which is Better for Your Brakes?

Drilled vs Slotted Rotors: Which is Better for Your Brakes? Are you in the market for high perform…

What Can Cause Engine Oil Pressure to Drop?

What Can Cause Engine Oil Pressure to Drop? If you have experienced your engine oil pressure light…

Choosing the Right Headlight Bulbs for Your Car