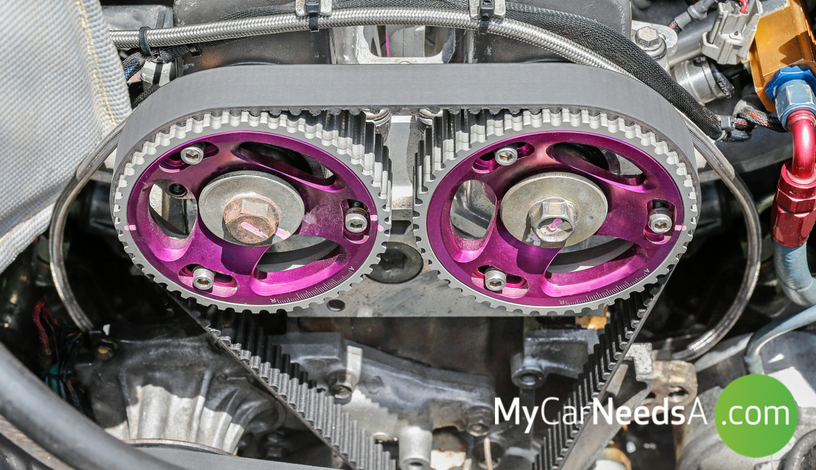 We recently brought you the full lowdown of how the timing belt on your vehicle works, which we hope amply demonstrated its vital importance to its smooth running - as well as some of the possible consequences which could follow from its failure.

The least-worst scenario of a broken timing belt is that your car simply won’t be able to start - but depending on the type of belt fitted to the car, the consequences could be far worse, up to and including the destruction of a large part of the bottom end of your car’s engine.

The smooth running of your car’s engine is governed by its timing belt, as broadly, it helps ensure that the cylinders all fire at the precise moment they’re supposed to, and they stay properly in line. This in turn governs the working of a number of other engine parts, as outlined below.

The timing belt connects several of your engine’s main components, such as the alternator, water pump, power steering pump and air conditioning compressor. This belt needs to run at a constant tension to ensure that it is always ensuring that your alternator is producing enough power to move the pulleys which drive all these individual components.

So as you can see, it’s effectively the source of the right amount of energy (i.e. tension) to keep all these disparate parts working together - and if it doesn’t work properly, you’re likely to soon end up with a serious problem, in the shape of the failure of at least one of the components for which it provides the driving force.

A Story In Four Parts

A timing belt tensioner is made up of four main components - a base, tensioner arm, spring and pulley. The base is the mounting for all the other parts, while the spring ensures that the belt is kept pulled tight.

The pulley then ensures that the belt moves as it should, while the tensioner arm, found on the bottom of the tensioner, is designed to counter the spring, and so allow the timing belt itself to be removed or adjusted.

The setting of your timing belt tensioner should be checked regularly as part of your car’s routine service schedule - but it’s only a job for an experienced mechanic, due in part to the difficulty in accessing it.

The tensioner can also be removed and replaced separately from the timing belt itself, so that if it does show signs of not doing its job properly, the job can be completed without the need for a new belt. But because of the delicate nature of the work, and the fact that so many other components are depending on its proper operation, timing belt tensioner replacement is always best carried out by a skilled mechanic with experience of the operation.

Going So Far - And No Further

As we mentioned in our timing belt article, many belts have a fairly rigidly set design life. Vehicle manufacturers factor their replacement into their regular servicing schedules, and provided you stick to the one which applies to your car, van or truck, you can be pretty confident that you won’t have any problems.

But while a belt is a single component, and therefore the chances of it going wrong in isolation are fairly slim, there is more potential for failure with the timing belt tensioner due to it comprising a number of individual components. And if the tensioner isn’t working correctly, it won’t take long for the pulleys driving one or more of the engine components to start working out of synchronisation - and this is when you run the risk of encountering potentially catastrophic problems.

The tensioner also needs to be able to spin freely at all times, so rust and debris can hamper it from doing so. This is a particular problem if you regularly drive on roads which are salted in the winter, as the salt is picked up by the motion of vehicle wheels and liberally distributed around the underside of your car’s body and engine.

The pulley which operates the tensioner may also cause vibrations, which can themselves damage the tensioner, so you need to be aware of any possible pulley damage.

How To Spot When Your Timing Belt Tensioner Needs Replacing

A key time to listen for signs of needing a timing belt tensioner replacement is when you are either starting up your vehicle or accelerating.

If at either of these times you hear a rattling noise, that could be a symptom of the belt not being pulled tight when it needs to be.

Pay careful attention to how well your car accelerates from low speeds. If the engine’s revs suddenly climb (this will be obvious as its noise level will increase), then that’s a sign that your car isn’t picking up speed smoothly, which could be attributed to your timing belt not being at the correct tension.

Squeaks or screeches as you change gear are also a telltale sign of problems with your timing belt tensioner.

If your timing belt tensioner is failing you may also see that your car’s battery warning light stays illuminated after it should have gone out. This is because the battery will be losing power as a result of the belt not turning as quickly as it needs to in order to power the battery.

What Should You Do If You Think You Encounter Any Of These Symptoms?

Most importantly, you need to get them checked out as soon as possible. You can get a quote for timing belt replacement quickly and easily, and if the tensioner also needs to be adjusted, these jobs are best carried out at the same time.

So don’t ignore any unusual squeals from around the front end of your car - it could be a sign of problems with your timing belt or tensioner. And if left untended, these can soon damage large parts of your engine. But whatever the cause, by asking a trusted and experienced mechanic to take a look, they may well be able to nip any problems in the bud.

You can get quotes for a variety of work on your car by registering with Mycarneedsa.com. Simply enter the details of the work you are looking to have done, such as timing belt replacement, and look out for the quotes from our rated and trusted garage partners in your area to carry out the job.