What Is A Timing Belt? 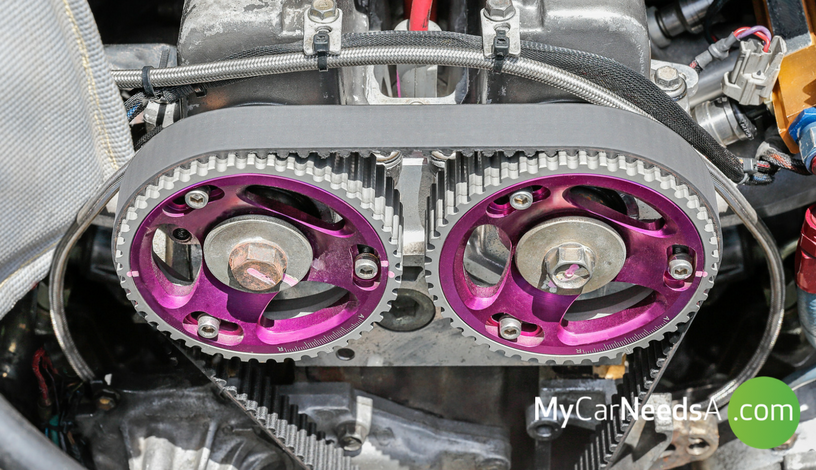 What Is Your Car’s Timing Belt And Why Is It So Important To Replace It Promptly?

A timing belt, often also referred to as a cam belt, is an integral part of the workings of all internal combustion engines.

This latter part, in turn, controls the opening and closure of the car’s intake and exhaust valves, and ensures that they are kept in time with the pistons’ up and down movement inside the engine’s cylinders.

The maintenance of this precise timing is important for the smooth running of an engine and, as a timing belt is often made of rubber, it can lose its optimal tension after a period of time, meaning that the valves no longer open and close at their ideal intervals.

Essentially, its job is to keep the top - cylinder head and valves - and bottom - crankcase and pistons - sections of your car’s engine working in close synchronisation.

Here’s What Happens If Your Timing Belt Snaps…

The most difficult aspect of your timing belt maintenance is that it will usually continue to give dependable service, with minimal attention, for a number of years. If you have a snapped timing belt you can compare a quote using us to fix it with the best service providers.

But rubber is, of course, a perishable item, and the constant exposure to the high temperatures found in an engine, together with the speeds at which the belt has to constantly rotate, means the timing belt has to work really hard to keep everything running harmoniously - rather like an orchestra conductor.

If your timing belt snaps, there are two likely scenarios, which will depend on the type of engine timing configuration employed.

So-called ‘interference’ engines need the cam belt to prevent the valves and pistons inside your engine from smashing into each other at high speed. And of course, if they were to do this, it’s likely to result in the respective parts being smashed to pieces, and distributing the resulting debris all over the inside of your engine, so unleashing all kinds of mayhem which can cause damage way beyond the individual components involved.

If your car has a non-interference engine, the pistons and valves are housed separately, so a snapped timing belt shouldn’t cause any damage to them, and a repair can be made simply by fitting a new belt. However, your car will still be immobilised if the belt snaps, which could result in you having to pay to have it towed to a garage if you don’t have the benefit of membership of a recovery service.

If you’re in any doubt about your car’s type of engine and belt, search the internet, because most of the information is out there.

What’s The Lifespan Of A Typical Cam Belt?

As a general rule, you can expect a timing belt to last up to five years, or 60,000 miles. In cars where this replacement is needed, it is usually built into the servicing schedule.

However, the one fly in the ointment is that, over such a period, any car can pass through several owners’ hands, and might be subjected to differing degrees of use (and abuse) in that time.

Your first resort for checking the manufacturer’s recommended intervals for cam belt changes is your car’s manual. Of course, if you didn’t get one when you bought the car, you should take a look at your manufacturer’s website, as this often contains full details of servicing and maintenance schedules, on which the replacement will be flagged.

In any case, if you’ve stayed within the mileage mentioned above, you should be prepared to have the belt replaced in the run-up to your car’s fifth birthday, and every five years after that.

A replacement timing belt will be a relatively modest cost on the menu of a typical car service, especially if carried out as part of a scheduled maintenance programme.

But as we’ve already seen, it’s the consequential damage of a failure which can prove catastrophic and costly. So you should establish as soon as you can after taking ownership of a car what the recommended interval for having it changed is, and whether or not, and when, it has been changed in the past.

But importantly, because the belt has to be fitted and remain in perfect synchronisation with other engine parts, it’s a repair which is best done by a mechanical expert.

So whether you have your car serviced by a franchised dealer or an independent garage, you should work closely with them to make sure you know when the job needs to be done, and certainly not be tempted to skip having it looked at at the appropriate time. Make a note of it in your car manual, or on a calendar, and once you get into the habit, like plenty of other car maintenance tasks, it will soon become second nature.

If you need a replacement car timing belt, or cam belt repair, for whatever make and model of car, you can get competitive quotes for the work quickly at MyCarNeedsA.com. Just enter your reg and detail your car timing belt job to get started!