How Do Car Tyres Work? 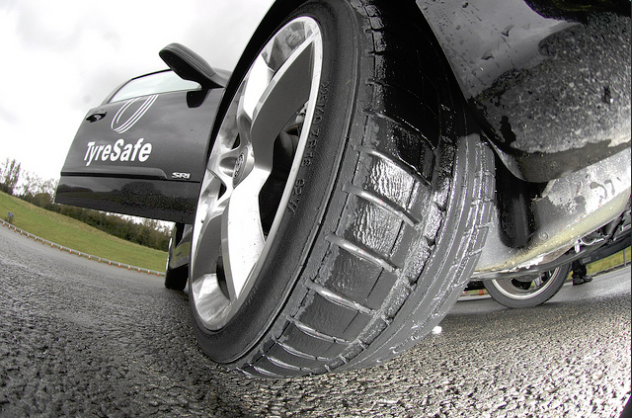 Whenever you’re driving, whatever type of road you’re driving on, it’s a sobering thought that the most important part of the vehicle which ensures that you keep yourself, your passengers, your cargo, and all other road users safe, is the area of roughly 23 to 28 square inches (15,000 to 18,000 square millimetres) at any one time.

This is the amount of your fitted tyre surface which is in direct contact with the road at any one time - that’s no more than the average pair of shoes. But when you consider that this amount of contact is keeping you, your car, your occupants and everything else you’re carrying moving safely at all times, that’s quite a lot of responsibility for four patches of rubber to be carrying.

Current UK law requires car, van and LCV drivers to have at least 1.6mm of tread across the central three-quarters of the tyre, around its entire circumference.

Tyre treads are designed using highly scientific methods, so as to provide the optimum level of grip to a road surface in all conditions.

Depending on the type of vehicle and the conditions under which it operates, there are six different types of tread pattern. These are listed below, along with their main respective benefits:

What Is A Tyre Made Of?

You may think there’s one, obvious, answer to this - rubber. While that’s true, the rubber, along with other carefully chosen materials, is formed into several different components, which are detailed below:

Other Features Of A Tyre

One of these with which you should be familiar is the groove, which is the sunken part of the tyre’s tread. The amount and pattern of the grooves directly influence a tyre’s quality, while also having a bearing on the amount of road noise which they create, and on the rate at which the tread wears.

A sipe is a fine groove in a tyre’s tread pattern, which performs several important functions including enhancing braking ability and driving performance, as well as keeping the load which the tyres are supporting stable, and so adding to the driver’s and passengers’ comfort. The sipe on a winter tyre gives valuable extra grip through providing an extra edge for this purpose, while it also helps the driver keep control when braking on a wet road.

What’s The Contribution To A Tyre’s Working Performed By Air?

The air within a tyre produces pressure which performs a handful of valuable functions to keep it working properly and safely.

This pressure helps ensure that every part of the tyre can perform its respective job, as described above. But the air pressure should also be kept at a level which not only keeps the structure of the tyre strong, but also includes some flexibility so that the material in the tyre has some ‘give’ in it to help provide a smoother ride over bumpy surfaces.

That’s part of the reason why it’s so important to keep the right amount of air pressure within a tyre - if the pressure is too high, it raises the tyre slightly off the road surface and so reduces the amount grip available; while too little air pressure within the tyre causes the centre of the tyre to sag under the weight which it has to support, and this also means the tyre cannot grip or stop the car as effectively as it should.

Are Winter Tyres A Worthwhile Investment?

Winter tyres aren’t necessarily the huge-treaded specialist types which you might expect to find on huge pick-up trucks or 4x4s.

More commonly, they are outwardly almost identical to standard all-weather tyres, but according to Which? magazine, “winter tyres are designed specifically to remain supple in colder temperatures and maximise traction when driving on snow and ice.”

The key differences are that they use a softer rubber compound - usually by including more natural rubber in the mix - the surface of the tread blocks is covered with sipes (see earlier for a full description), and they generally have deeper tread grooves than conventional summer tyres.

Modern winter tyres differ from previous incarnations in that they are designed to work effectively in all conditions and temperatures, and have been developed as a compromise between the thick-treaded but hugely unwieldy old-style equivalents, and the standard road tyre which starts to lose effectiveness in heavy snow and ice. These are a much better solution for the conditions which we find most commonly in the UK, which might see a few days of snow or ice, but these only lasting for a few days at a time.

The main differences in a winter tyre won’t be visible until you get close up. Then you’ll notice thousands of tiny sipes, which come into their own in dispersing larger amounts of water more quickly than is possible with a standard tyre.

The negative side to such winter tyres becomes apparent once the temperature rises above 7 degrees C. Because there are so many more grooves between the pieces of tread, this makes the tyre - and hence a vehicle riding on them - less stable. The many extra sipes on these tyres will pick up much more snow between their grooves than standard tyres, and so for driving on hard-packed snow, can offer some benefits of extra grip.

While you might not drive enough miles on slippery winter roads to make the investment in all-weather tyres feasible, they are increasingly being fitted to fleets of trucks and vans which need to keep moving in all conditions, for at least part of the year. But for most standard cars, you have to consider that, due to the extra resistance these tyres create, your fuel consumption will suffer.


As they do such a vital job on your car, or any vehicle, you should be sure to regularly check that your tyres are in good condition. Once your tyres are starting to become less effective at their job, don’t hesitate to register with MyCarNeedsA.com and shop around for the best prices for buying and fitting new tyres in your area.

How to Find Out My Tyre Size?

How to Find Out My Tyre Size? Surprisingly, many motorists don’t know what size tyres they need…

How to check tyre pressure?

Tyres are the only part of your vehicle that makes contact with the road at all times, meaning the…

Should I Buy Winter Tyres?